The publications of Thomas Bird Mosher have turned up in public exhibitions over the decades both during Mosher’s lifetime and up to the present day. The first major exhibition to include Mosher’s books was the 1901 Pan-American Exposition in Buffalo, and the second was the 1904 Louisiana Purchase Exposition at St. Louis. Both of these expositions displayed the binding work of Otto Zahn, a binder who frequently liked to finely bind choice examples of The Mosher Books. Zahn’s binding of Wine, Women and Song (1899) won the highest award at Buffalo, while the honorary bindings in the second exposition were chronicled in Zahn’s accompanying monograph, On Art Binding, which photo-featured two of Mosher’s publications. Incidentally, a much smaller exhibition featuring Mosher’s books in bindings was held at Minneapolis in 1903.

The next major showing was at the 1906 Grolier Club exhibit entitled “An Exhibition of Some of the Latest Artistic Bindings Done at the Club Bindery.” Of the 138 bindings exhibited, eight were on Mosher Press publications (more than any other publisher or printer represented). Four Mosher books in special bindings were also exhibited at the Rowfant Club of Cleveland in April 1909. Mosher also received recognition in Elmer Adler’s “Exhibition of the History of the Art of Printing: 1450-1920” held in 1920 at The Memorial Art Gallery in Rochester, New York.

Though there were certainly other exhibitions which included Mosher’s books, the next exhibit of which I am aware was in Newark, NJ where, in 1925 and in 1929, many copies of The Mosher Books were displayed at “The Richard C. Jenkinson Collection of Books-Chosen to Show the Work of the Best Printers” exhibit held at the Newark Public Library. Since then, Mosher’s books have turned up at other exhibitions as well (e.g., the Exhibition of Modern Fine Printing at the Grolier Club April 19, 1960), but the first major exhibit devoted entirely to the Mosher imprints was “An Exhibition of Books from the Press of Thomas Bird Mosher From the Collection of Norman H. Strouse” held at The Free Library of Philadelphia from January 16-March 12, 1967. Samples from Strouse’s collection filled thirteen cases with 156 displays including the fourteen series, privately printed books, Mosher correspondence, catalogues, and The Bibelot. Finely bound and/or inscribed copies, and books printed on Japan vellum or Roman vellum, also enriched the show. Norman Strouse followed this exhibition with another in 1968 called “Ladies in My Library” which even exhibited a Mosher in binding by his wife, Charlotte Strouse: entry No. 33, Edward FitzGerald’s Polonius: A Collection of Wise Saws and Modern Instances (Mosher, 1901). (See image below.) 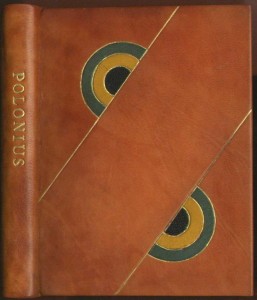 The 1972 exhibit organized by the Art Museum of Princeton University and The Art Institute of Chicago, “The Arts and Crafts Movement in America 1876-1916,” featured the Mosher book, Fancy’s Following (1900). And in 1979 Laurie Crichton curated the exhibit, “Book Decoration in America 1890-1910” at the Chapin Library of Williams College. Eleven of Mosher’s books were shown with the first serious emphasis being given to the designers behind The Mosher Books. Ten Mosher titles are also listed in the seventy-page exhibit catalogue for the 1980 exhibit “William Morris in Private Press and Limited Edition” which was held at the General Library, University of Missouri-Kansas City, guest curated by John J. Walsdorf, Jr.

There have been several exhibitions in the early 1990s, two of which were to commemorate the 100th anniversary of the first appearance of The Mosher Books. Dr. Krishnamurti curated the 1991 London exhibit, under the aegis of Henry Sotheran Limited and the 1890s Society, of “Women Writers of the 1890’s” which displayed two Mosher publications. In the same year, the first of two major exhibits exclusively devoted to Mosher’s imprints was held: “A Modern Love of Literature-One Hundredth Anniversary of Mosher Books” at Kalamazoo College from June 7-August 30. This exhibit revolved around a gift of Mosher Books from labor attorney, Robert Athol Huston, and the exhibit included 36 stations in the A. M. Todd Rare Book Room. By far the most significant Mosher exhibition of the 1990s is that of “Thomas Bird Mosher and the Art of the Book” held at the Paley Library of Temple University from May 15-August 15, 1992. There were 75 exhibit stations showing a wide variety of items from the fourteen series, fine bindings, and extra-illuminated copies, with an emphasis on the graphic artists whose work appeared on or in The Mosher Books. Accompanying the exhibit was a 112-page illustrated catalogue co-authored by Jean-François Vilain and Philip R. Bishop which also included a 10-page “Addenda & Corrigenda to Benton Hatch’s A Check List.”

Two more exhibits known to include Mosher books were both held in 1996 at The Craftsman Farms Foundation in Parsippany, NJ. One particularly fine binding by Elizabeth Utley on The Blessed Damozel (1901) appeared in “Women’s Work: The Role of Women in the Arts and Crafts Movement” from July 7-October 6, curated by Suzanne Perrault. The other exhibit, curated by David Lowden, was entitled “William Morris and the Printed Page: English Influence on American Book Design” from September 8-October 27, and featured four works from The Mosher Press.

The most recent full exhibit of The Mosher Books is “The Norman H. Strouse Collection of Books Published by Thomas Bird Mosher” held at the University of San Francisco from June 23-September 25, 1998. It includes 17 cases (arranged chronologically) of books published by Mosher, books published by The Mosher Press after 1923, Mosher’s book catalogues, ephemera, books from Mosher’s library, correspondence, and other manuscripts (13 of the 17 cases shown in above link).

Calvert’s Ten Spiritual Designs (1913) was selected for the Grolier Club exhibit “A Century for the Century” (Sept. 15 to Nov. 13, 1999) as one of the top 100 finely printed books of this century. This exhibit, curated by Jerry Kelly and Martin Hutner, includes selections from England, Europe and America. The Ten Spiritual Designs was again chosen as one of eight Mosher items on display at the Grolier Club’s exhibition “Illustrating the Good Life — The Pissarros’ Eragny Press, 1894-1914” held February 21 – April 28, 2007, in which the Mosher Press is shown to be a major conduit displaying Eragny Press designs to book buyers in America. A revised form of “Illustrating the Good Life…” was at Brown University’s John Hay Library, Sept. 4-Oct. 26, 2007 and included three Mosher books. The exhibition then traveled to The Sacramento Public Library for opening on January 11.

“Few, But Roses: Classical Texts & Fine Printing in the 20th Century” (Oct. 25, 1999 to Jan. 2000) was presented at Trinity College in Hartford, CT. The exhibit is curated by Alesandra Schmidt Woodhouse who chose Mosher’s edition of The Eclogues by Virgil (1912) as one of America’s fine press contributions. Additionally, in commemoration of the return of a traveling exhibit, the Delaware Art Museum has mounted “The Return of the Pre-Raphaelites” from September 23, 2007 until whenever. The Mosher Press copy of The Germ (1898) is “used to open a discussion of Pre-Raphaelite illustration” by displaying William Holman Hunt’s two-page illustration which accompanies a poem by Thomas Woolner.

Muse Selection of the Month for October 2002 at the Gould Library at Carleton College (Northfield, MN) presents a sampling of Mosher’s work from their Special Collections.

Bound to the Best–The Club Bindery, 1895-1908. Held at the Grolier Club in New York from Sept. 15 to Nov. 20, 2004, this exhibition included two Mosher books in Club bindings:  Swinburne’s Poems and Ballads (1902, entry #30) and A Little Garland of Celtic Verse (1905, entry # 33). The books are also pictured in the exhibition catalogue Bound to be the Best-The Club Bindery. Catalogue of an Exhibition at The Grolier Club by Thomas G. Boss with an Essay by Martin Antonetti. Boston: Thomas G. Boss Fine Books, 2004. To read a personal view on the opening night’s festivities, see Bishop’s essay.

The Grolier Club exhibition on “American Little Magazines of the 1890s: A Revolution in Print” (February 20-April 27, 2013) included a case of material on The Bibelot which is also covered in the accompanying exhibition catalogue (pp. 42-47)

A talk on Mosher was given to the Manchester Bibliographical Society in Manchester, England on March 17, 2008 by fellow of the John Rylands Research Institute, Brenda J. Scragg. Her PowerPoint presentation entitled “The Books of Thomas Bird Mosher: an American private press publisher at the turn of the 19th century” introduced Mosher’s books and their designs, and credits the Mosher Press bibliography and the Mosher Press website for some of the presentation’s contents. Authors used, books published in the various series, and some biographical information were presented, but the preponderance of the show was devoted to book design. Decorative papers were also identified via the Schmoller Collection of Decorated Papers at Manchester Metropolitan University.

Two exhibitions in the first half of 2016 presented books from the Mosher Press, one as part of the Penn Libraries exhibition of color in private and fine press books in their “Across the Spectrum” exhibit from February to May, and the other being the “New Members Collect” Exhibition at the Grolier Club, June through July. Both are covered here.

Philip R Bishop has also given several talks on Mosher to various book groups. Each presentation was accompanied by exhibit cases of Mosher books which further helped to exemplify the points discussed. The groups before whom Mr. Bishop spoke included:

If other exhibits, unlisted here, included The Mosher Books as part or the whole of the exhibit, please kindly forward detailed information to the website presenter, Philip R. Bishop at mosher@ptd.net.